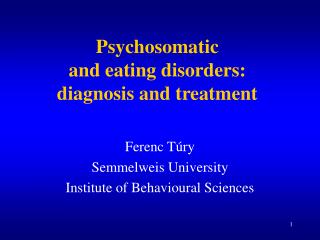 Dual diagnosis: An Integrated Model for the Treatment of People with Co-occurring Psychiatric and Substance Disorders

Diagnosis and Treatment of Diabetic Nephropathy SFM Didactics January 14, 2003 Carol Cordy, MD - . 1. why should you

Perspectives on the Causes of Mental Disorders - . psychodynamic results from intrapsychic conflict and ineffective