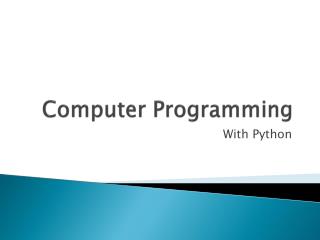 Computer Programming. With Python. Usefulness of Programming. Simplicity Programs are easier to write than repetitive or tedious tasks. Efficiency Computers run hundreds of millions of computations every second, much faster than humans. Flexibility Computer Programming - . putting the machine under our command. definition of a program. a collection of instructions