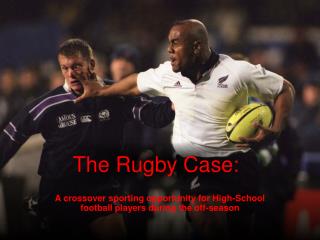 The Rugby Case: A crossover sporting opportunity for High-School football players during the off-season Rugby: An Introduction

The Rugby Case: - . a crossover sporting opportunity for high-school football players during the off-season. rugby: an

Rugby - . by: volker patrick jarvis (yes, i’m on facebook ). the basics rugby field. the basics the players and their

RUGBY - . by: meredith gagnon. training year round and staying in shape are some of the key parts to playing the game.

Rugby - . presentation by donald moran. why i love rugby. toughness and physicality multiple people in my family play

Rugby - A brief history and explanation of a hooligans sport played by gentlemen by hoitt mcallister. rugby. problems

Rugby - . what is rugby?. game of two teams (15 or 7 to a side) played with an oval ball similar to football and

RUGBY - . a beginner’s guide. the game. pitch / duration two halves 40 mins each injury time add at end of half

RUGBY - . history. the game of rugby was invented in 1823 at rugby school in warwickshire it began when a schoolboy

RUGBY - . what is it? by marcus calhoun. history. the origin of rugby is reputed to be an incident during a game of

RUGBY - . chris reese. why rugby?. i have been playing rugby for seven years a lot of people don’t know about the sport

rugby - . by noah . learning targets. when was rugby invented? who invented rugby? how many points dose rugby get? what

Rugby - . introduction. the first game of rugby played in new zealand took place on saturday, may 14, 1870 between a

RUGBY - . the game. rugby is over 160 years old. it was developed in the english public schools. it is played on the

RUGBY - . by karlis zirnis. the history of rugby. rugby dates back to 1823 william web ellis picked up the ball during a

The Scottish Rugby Team - . by hannah mcrae. my package. my package is going to be about the scottish rugby team because