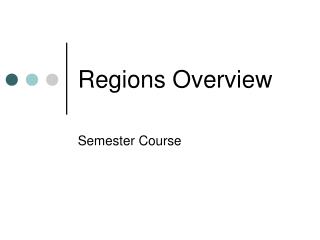 Regions - . an area in the landscape that links places together using any parameter the geographer chooses. an area that

Regions - . introduction to regions. it is useful to think about geographic knowledge at different levels of complexity.

Regions - It is home to “motor city”. midwest. regions. it is one of the fastest growing regions of the united

Polar Regions - . by: stephanie nguyen. research and background knowledge. where will i research?. i will research in the