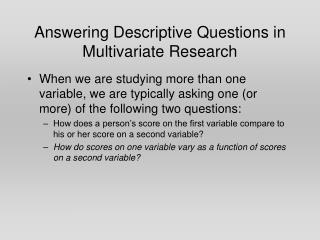 Answering Descriptive Questions in Multivariate Research When we are studying more than one variable, we are typically asking one (or more) of the following two questions: How does a person’s score on the first variable compare to his or her score on a second variable?

Charts and Graphs - . scientific visualization i v105.01. types of charts and their uses. why create charts? present data

The Impact of Metabolomics on Flavor Chemistry - . josephine charve and gary reineccius department of food science and

Vesna Luzar-Stiffler, Ph.D. - Measuring ict: a need for expertise how will we know when “the most dynamic and

Research Questions &amp; Hypotheses - . overview. what is a research question? how does one develop one? how does one