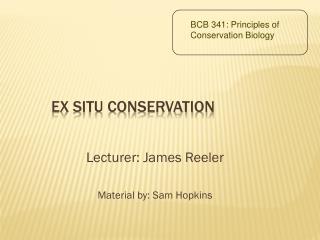 Ex Situ Conservation. BCB 341: Principles of Conservation Biology. Lecturer: James Reeler Material by: Sam Hopkins. Introduction to ex-situ conservation. Involves taking an animal or plant out of its habitat and placing it in human care

Political, legislative and practical aspects of in situ conservation in Germany - In the context of genetic erosion l.

GMOs in the environment and conservation – the German approach - . beatrix tappeser, head of division ii 3.3 - gmo

4.3 Conservation of biodiversity - . why should we preserve habitats and species? four reasons why - partner. the value