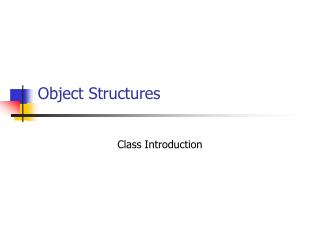 Object Structures. Class Introduction. Topics in this Lecture. About the instructor About each of you Why computer science is a great place to be Why this class is critical to your success The whole subject in 30 minutes or less Syllabus review Q&A. About James Madison.

Introduction to Amber - . the theory and practice of biomolecular simulations using the amber suite of programs. dr.

Introduction and Welcome - Addressing lead-based paint hazards during renovation, remodeling, and rehabilitation in