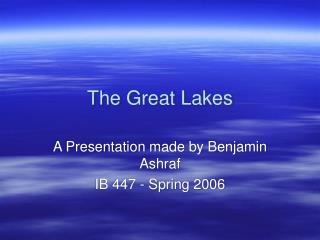 The Midwest Region - . great lakes. the great lakes. from largest to smallest they are: lake superior--the largest

The Great Lakes and the Greatest Lake - . characteristics and processes physical and biological challenges local and

History of the Great Lakes

GETTING AROUND THE GREAT LAKES STATE: A BRIEF HISTORY OF TRANSPORTATION IN MICHIGAN - . mike unsworth unsworth@msu.edu.

LAKES - . lakes are situated in the north, in a region called “the great lakes”. they have an area of about 250,00 sq

JEOPARDY – Great Lakes History - . test your knowledge of the history of the great lakes, its ports, and ships! created