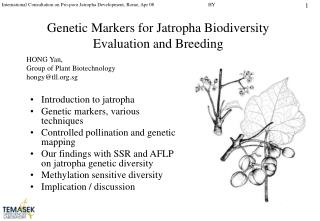 SELECTIVE BREEDING &amp; GENETIC ENGINEERING - . 3.f. develop a logical argument for or against research conducted in

THE USE OF GENETIC MARKERS IN PLANT BREEDING - . use of molecular markers. clonal identity, family structure, population

Molecular Tools for Aiding and Breeding of Aquaculture Species - . masters in aquaculture and fisheries genetic and

Biodiversity - . components and benefits. one important renewable resource is biodiversity: the different life forms and

Genetic Engineering - The history of genetic engineering. we have used selective breeding for years to get dogs well

Genetic Engineering Biotechnology - . what is genetic engineering?. the manipulation of a trait in an organism to create

Discussion Group : Breeding - . jatropha breeding break out: what needs to be done?. traits for: biodiesel use local use.

5. Evolution and Biodiversity - . central concepts: evolution is the result of genetic changes that occur in constantly