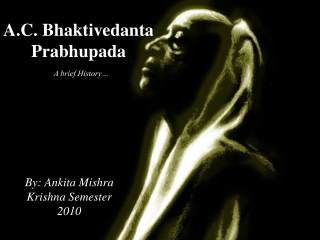 A brief History…. A.C. Bhaktivedanta Prabhupada. By: Ankita Mishra Krishna Semester 2010. Fast Facts. Born in Calcutta, Bengal on the very next day of Krishna Janmashtami. Was empowered by Lord Nityananda Prabhu. Slept only for 3 hours on any day of 24 hours!.