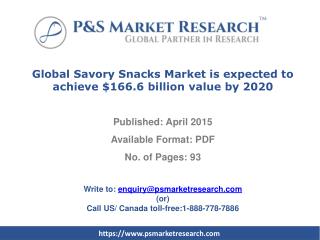 People are demanding varieties in snacks, which is encouraging companies to launch new products. Several companies have been announcing the launch of products with new tastes, flavours, and shapes to maintain their competitiveness in the market. Moreover, customers’ increasing inclination towards organic foods is compelling the savory snack companies to innovate their products for customer retention.

Supercapacitor Market to reach $4.8 billion by 2020-Ceskaa Market Research - The global market for supercapacitor is

Pharmacovigilance Market Expected to Reach USD 6.10 Billion - According to a new market report published by transparency

Tea Market is expected to reach USD 47.20 billion in 2020 - According to a new market report published by transparency

Pies, Pies, Pies! - . unit 5 food for meals and snacks miss godbey. pies. a pie is a flaky crust filled with either a