The Suez Crisis and the Six-Day War - PowerPoint PPT Presentation 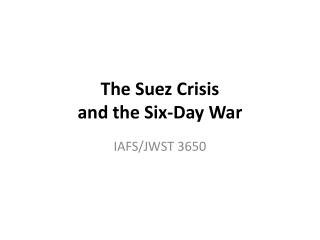 The Suez Crisis and the Six-Day War

The Suez Crisis and the Six-Day War

Egypt and the Arab-Israeli conflict - . wars between states. the basic situation. egypt controlled the gaza strip and

ARAB ISRAELI CONFLICT - . background questions. what is this conflict about? what are the roots of this conflict? romans,

THE SUEZ CRISIS AND THE FIRST “UN PEACEKEEPING FORCE” - . dr. walter dorn based on a presentation by dr. david last,

Below is a link to the Suez Canal and Six-Day War PowerPoint - . https://

The Arab-Israeli Conflict - . part 1. cfr crisis guide: the israeli-palestinian conflict – . why is there so much