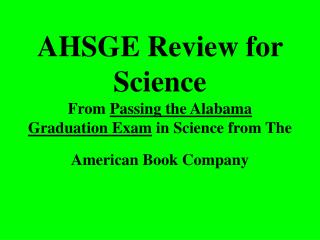 How to Survive the Graduation Exam (AHSGE) - . a survivor’s manual for lauderdale county students. location. lauderdale

Passing The Graduation Exam in Social Studies - . chapter 2 the revolutionary war and the war of 1812 by matthew pippin.

Science from the kitchen - . steven s. sexton college of education university of otago. why am i here at constanz?. as a

Science Review for Georgia High School Science Graduation Test - . “education is what remains after one has forgotten

Earth Science Book Review - . will you know what to do when…. your asked to get an old textbook out?. old textbooks

SPECTROSCOPY From Science to Science - . once the science case is developed, a long path goes to the exploitation of the

FROM THE BOOK: - . grays sports almanac for venture

Science Final Exam Review - . the system that takes oxygen to the rest of the body is the. circulatory system. the

Alabama High School Graduation Exam - . the american revolution and the war of 1812. causes . there are many causes for

Alabama High School Graduation Exam - . study guide. 1. what is the term which refers to the attempt by europeans to

Alabama High School Graduation Exam - . the united states government and the constitution. foundations of the u.s.