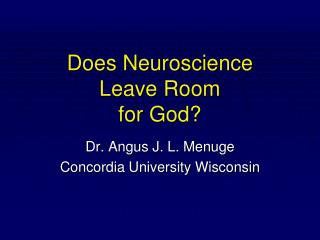 Does Neuroscience Leave Room for God?

Does Neuroscience Leave Room for God? Dr. Angus J. L. Menuge Concordia University Wisconsin 1. The Presumption of Materialism. Many scientists today presume materialism will provide the right answers prior to investigating the facts.

Does Neuroscience Leave Room for God? LEAVE A BLANK PAGE - . your homework tonight is to complete a title page for: geographic skills. map direction &amp;

Computational Cognitive Neuroscience - . psyc 4175/5175 randall o’reilly. how would you build it?. if you want to

Basic Issues in (Computational ) Neuroscience - . what is the logics of the brain ? how similar is the brain with

Beating the Brain Game Communications success in the new era of Neuroscience - . which advert do you like best?. which

A Room of One’s Own - . virginia woolf. chapter one. the essay begins with a question – ‘but, you may say,… what

Biohazard Room - . month day, year exhibit 1. this door has direct access to the outside without a locking mechanism.

My Room - . you might be shocked when you come into my room. i moved into my grandparent’s house and they only had one

Room Scheduling Solution at Room manager - Roommanager.com is a platform which simplifies room scheduling solution and