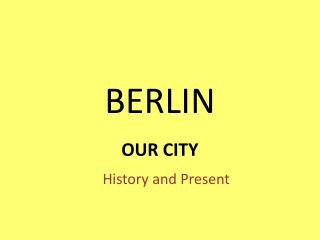 BERLIN OUR CITY History and Present History of Berlin 12 th -13 th century 1230 The church Nikolaikirche (St. Nicholas’s) is built in the area known today as the Nikolaiviertel. The first documentary reference of the Marienkirche (St. Mary’s) dates from 1292. 1237

Plastic Surgery Berlin - Searching for plastic surgery in berlin? stunning you is the plastic & cosmetic surgery

The Berlin Crisis - . how do the us &amp; soviet union “fight” their first cold war battle?. trouble in berlin.

Berlin - . berlin. back as the capital of unified germany back as one of europe’s greatest – and most vibrant –

London and Berlin - . the differences between london and berlin. structure. 1. general ( where it is ) sights ( most