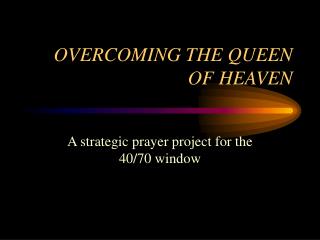 OVERCOMING THE QUEEN OF HEAVEN

OVERCOMING THE QUEEN OF HEAVEN A strategic prayer project for the 40/70 window (A) WHO OR WHAT IS THE QUEEN OF HEAVEN? The deity worshipped by Israel which grieved God the most An extremely senior and powerful pagan deity A spiritual power encountered by many intercessors today

OVERCOMING THE QUEEN OF HEAVEN

Queen Victoria's Family Tree! - . this is the family of the last victorian queen that came before our queen, queen

The Victorians - . “british history is two thousand years old, and yet in a good many ways the world has moved farther