Haiku and You - PowerPoint PPT Presentation 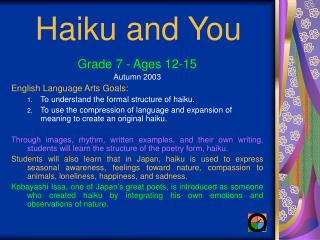 Haiku and You Grade 7 - Ages 12-15 Autumn 2003 English Language Arts Goals: To understand the formal structure of haiku. To use the compression of language and expansion of meaning to create an original haiku.

Poetry - Haiku - . mme dimarco. at the end of this unit. you will be expected to submit an anthology of poems as well as

HAIKU - . haikus are…. haiku is a poetic form and type of poetry from the japanese culture. combines form/structure,

Haiku Poetry - . narges mirfeizi madsg.com. from time to time the clouds give rest to the moon beholders. haiku poetry.

Haiku - . haiku is a traditional form of japanese poetry. the very first books ever written in japanese were collections

Haiku Poetry - . a famous poet. issa kobayashi was born in japan in 1763, more than two hundred years ago. by shumpo

You Too Can Haiku - Understanding asian literature and other cultures bogozan. you too can haiku. common themes/ motifs

Haiku Poetry - . haiku is also called nature or seasonal haiku. the modern haiku was fashioned by a japanese poet in the

Haiku - . haiku. japanese poetry it’s about nature has three lines with a total of 17 syllables the pattern is 5-7-5.

Haikus - . what am i?. haiku. &quot;haiku&quot; is a traditional form of japanese poetry.  haiku poems consist

What is a Haiku? - . haiku is an awakening of the spirit – away from technocratic rationality, away from the