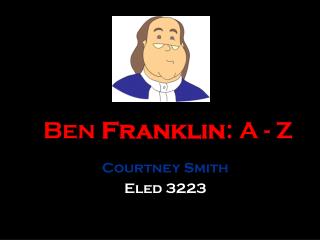 Ben Franklin : A - Z Courtney Smith Eled 3223 A bolitionist After seeing young African children learning, Ben became an abolitionist , freeing his own slaves and campaigning for the freedom and education of all other slaves. B ifocal Glasses

from The Autobiography of Benjamin Franklin - . from poor richardâ€™s almanack. background . benjamin franklin

Franklin’s Aphorisms - . objective: students will examine an excerpt from “poor richard’s almanac” and will

Thank you, Benjamin Franklin! - . overview. benjamin franklin was very creative. he discovered many things that we still

Benjamin Franklin’s 13 Virtues - . temperance : eat not to dullness. drink not to elevation. silence : speak not but