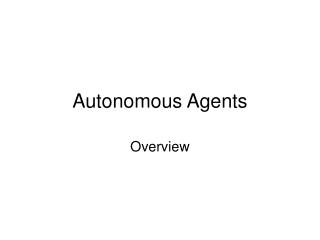 Creating Emergent Gameplay with Autonomous Agents - . borut pfeifer. disclaimers and other miscellaneous warnings. not an

COORDINATION and NETWORKING of GROUPS OF MOBILE AUTONOMOUS AGENTS - . cooperative

Autonomous Systems - . an autonomous system is a region of the internet that is administered by a single entity. examples