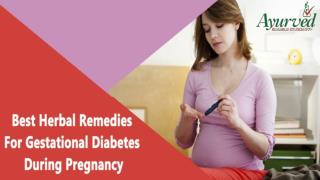 This powerpoint presentation describes about the best herbal remedies for gestational diabetes during pregnancy. Diabetes Ebook: Delicious Diabetic Recipes - Eating healthful meals is an essential part of managing diabetes. all of our

REDUCING THE RISK OF THROMBOSIS AND EMBOLISM DURING PREGNANCY AND THE PUERPERIUM - . dr noorzadeh fellowship