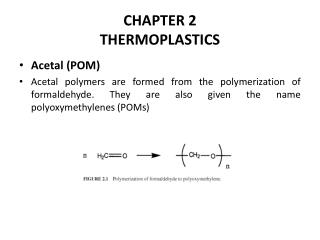 CHAPTER 2 THERMOPLASTICS. Acetal (POM ) Acetal polymers are formed from the polymerization of formaldehyde. They are also given the name polyoxymethylenes (POMs ). Acetals are highly crystalline, typically 75 percent crystalline, with a melting point of 180°C. Thermoplastic Elastomers Market is an emerging market with the production, supply and applications of Thermoplastic

THERMO PLASTICS - Click here. for main menu. these plastics possess a common property, they soften when heated and are

Chapter 10 - . characteristics of plastic materials. objectives. advantage of plastics over other manufacturing materials

Ch-19 Forming and shaping plastics - . thermoplastic (tp) – polymers that can be shaped when heated and regain original