In the News - PowerPoint PPT Presentation 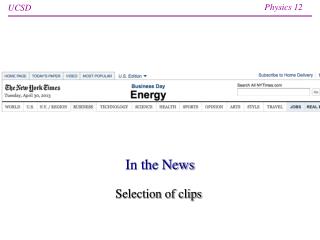 In the News. Selection of clips. Stocking Up. For the last month or so, I’ve been sitting on a number of articles that caught my eye, worth sharing with class most from New York Times Today, we’ll run through some of these picking out highlights. Articles.

Why Don’t We hear about it in the News - . the news media is fickle and jumps from story to story with no respect for

How did you get your news today? - . 11/11. teacher’s page. audience high school students grade 11 those students who

JMSC0101: Principles of Journalism and the News Media - . professor ying chan. chapter one what is news?. why

Chapter 9: Writing for Broadcast - Broadcasting is the world’s most pervasive medium of mass communication. selection

Writing News and Sports - Not generally meant to persuade, (it can unintentionally) the primary purpose is to inform