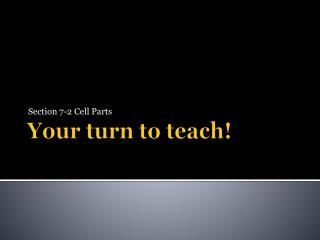 Section 7-2 Cell Parts. Your turn to teach!. How this is going to work:. You’re going to draw an organelle from the basket. You are to use your book to create notes for your organelles. Make a rough draft Get it checked for content and accuracy by Ms. Pitt Final draft onto an overhead.

Teachers: A Tribute - . edited by bridget sullivan. teachers: a tribute. to teach is to learn. japanese proverb.

Turn On, Boot Up, Reach Out - . free tech tools for collaboration, networking, office and outreach. contents blogs and

Go Ye and Teach - . the falling away. www.latterdaytruth.org. events in the apostasy. christ crucified unjustly arose on

Welcome - . facebook fan finder webinar ?. thank you for taking time to turn up!. am i coming through loud ‘n’

Session V - . christopherson august 21-22, 2012. introductions. what is your name? where you teach? what you teach this