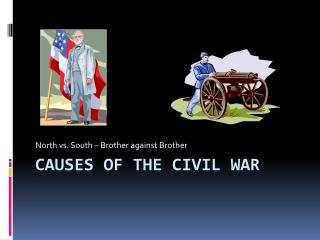 CAUSES OF THE CIVIL WAR

North vs. South – Brother against Brother. CAUSES OF THE CIVIL WAR. The Civil War. The Civil War lasted from 1861 to 1865 and led to over 618,000 casualties. Its causes can be traced back to tensions that formed early in the nation's history. Why did it happen?

CAUSES OF THE CIVIL WAR