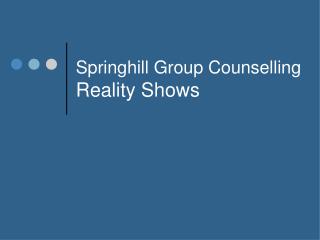 Alberto Giacometti - . ~the object of art is not to reproduce reality, but to create a reality of the same intensity.

Mick Cooper Professor of Counselling, University of Strathclyde - School-based counselling for young people in the uk:

This brochure has both strengths and shortcomings. On the plus side the guide shows: - • a highly visual and annotated

The School Counsellor and Assessment: Listening, Hearing, Recording, Reporting and Referring - . dr. jan stewart. of as

Reality Shock - : objectives after the discussion, the participant should be able to:. define ?reality

CHAPTER 1 HUMAN INQUIRY AND SCIENCE - . chapter outline. looking for reality the foundation of social science some