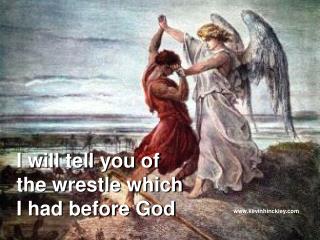 I will tell you of the wrestle which I had before God. www.kevinhinckley.com. The Wisdom of Hollywood…. So, where’s the Cannes Film festival being held this year? I get to go to lots of overseas places…like Canada. I owe a lot to my parents, especially my mother and father.

Jacob - . story line. twin sons, esau and jacob, were born to isaac and rebekah. esau, the firstborn, sold his birthright

“Show me your ways, O LORD, teach me your paths” - . ever wondered what you should do? ever wanted god to guide you?

B i blical Found ations of Freedom - . the ministry of jesus. jesus came to show us the father. we can define who god the

Grace or Sin - . leader: even my bones are not hidden from you, o lord. females: lord, you have probed me and you know

Encounter God and Live with the Consequences - . icel, sunday march 10, 2013. joseph dimitrov. in almost every biblical

Wrestling with God: How many rounds can you go? - Our mission: to guide those far from god into the new start found in

Jacob: Wrestling with God - . our wrestling with god. do you think you can wrestle with god? have you and/or do you

Wrestling with God - . genesis 32:1-32. catching up to the past. can we ever escape the past and not reap what we’ve