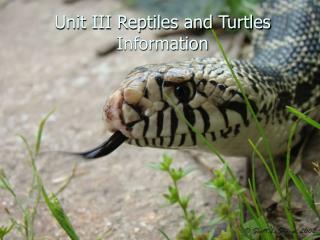 Mariana Island Sea Turtles - . background. populations of sea turtles have been around since the time of the dinosaurs

Reptiles - . evolution of  reptiles:. reptiles were 1st vertebrates to make a complete transition to life on land (more

Reptiles Ms. Bridgeland - . introduction to reptiles. what are reptiles? . ectotherms : what is an ectotherm again?.

TURTLES - . ece esİn 5b. how can they live in their shell ?. turtles usually live outside their shell, but if they sense