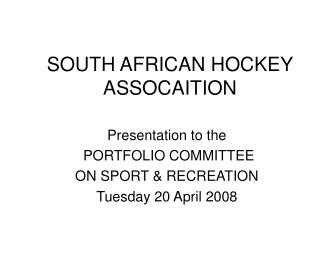 SOUTH AFRICAN HOCKEY ASSOCAITION Presentation to the PORTFOLIO COMMITTEE ON SPORT & RECREATION Tuesday 20 April 2008 Transformation strategy for opening access to disadvantaged communities in the sport of hockey. Hockey has a MPP programme and the number of areas are increasing.

Presentation to the Parliamentary Portfolio Committee for Health 14 March 2003 - . ara vision. to be the representative