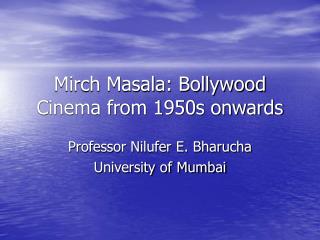 Mirch Masala: Bollywood Cinema from 1950s onwards Professor Nilufer E. Bharucha University of Mumbai The Beginnings… Cinema came to India almost as soon as it had been pioneered in the USA and in Europe The first films were shown in India on 7 July 1896 at Hotel Watson in Bombay.

French Cinema - . past and present. outline. introduction part i. the birth of cinema part ii. the classics part iii. the

The 1950s-A Social History - . the economy and mass consumerism demographics movin’ on the ‘burbs consensus and

The Golden Age of the Automobile – the 1950s in America

Describe efforts to end segregation in the 1940s and 1950s. Explain the importance of Brown v. Board of Education.

DANISH FILM 1896 – 2004 - Palle schantz lauridsen dept. of nordic studies and linguistics what is the lecture about?

V. Chohan CERN - An overview of cern antiproton facility in the eighties &amp; nineties : i.e., what was done

The World of Cinema and Theatre - . lesson 2. topic: watching films objectives: . to revise and enrich students’

1950s Drama - . the “golden age of television”. t.v. is a reflection of culture or social reality a ‘social

American Values in the 1950s - . the american dream in the 1950s. section 1: postwar america. after wwii, returning vets