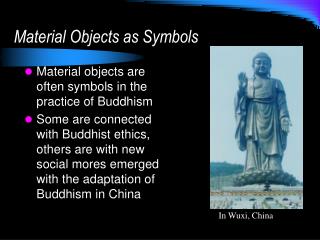 Material Objects as Symbols. Material objects are often symbols in the practice of Buddhism Some are connected with Buddhist ethics, others are with new social mores emerged with the adaptation of Buddhism in China. In Wuxi, China. Major materials objects imbued with symbolism:. Robes

Jewish Objects and Symbols - . please copy the bolded information on your handout. mezuzah. a mezuzah is attached to the

Infinitives as Objects - . when an infinitive acts as a noun, it can be a direct object. in the 1900s gandhi tried to

Kanzi used symbols to represent objects and actions - 1. describe how kanzi’s communication skills fulfill each of the

Taxis as symbols of each city - At dandenong taxi 13 cab, we will always take you to the place you need in a comfortable,

INDIRECT OBJECTS AS PASSIVE SUBJECTS - . two objects. i gave him s ome money yesterday . i gave some money to him

DNA as Genetic Material - . background info. once scientists showed that genes control the heritability of traits, and

Symbols - . what is going on here?. are they always what they seem?. the multi-dimensions of symbols. what is this? are

Symbols - . catcher in the rye. what is a symbol. according to wikipedia, a symbol is: an object , a picture , a written

Symbols - . fire . fire brings destruction and is the symbol for chaos and war in lotf, fire is used as a symbol of hope

Symbols - American. symbols. by cindy. the american flag. the bald eagle. the great seal. the liberty bell. the