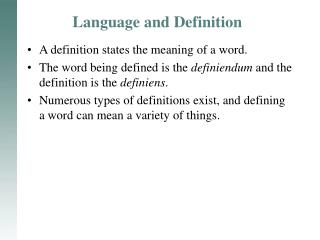 Definitions of language - . nonsense language test. hitiacumya? 'is a cat listening carefully?' hitisnosist? 'is the

LANGUAGE: MEANING AND DEFINITION - . logic and critical thinking. the functions of language in our day-to-day lives

1 About LANGUAGE The definition of Language Design Features of Language - Key points in this unit. 1 about language the

Meaning and Language - . part 1. plan. we will talk about two different types of meaning, corresponding to two different

The meaning of Language - . chapter 5 semantics and pragmatics week10 nov.19 th -23 rd. this is only a summary. reviewing

Object Definition Language - . design language derived from the oo community: can be used like e/r as a preliminary

The Meaning of “Addiction” in the English Language: - . and solving the mystery of “addiction 3 ”. the