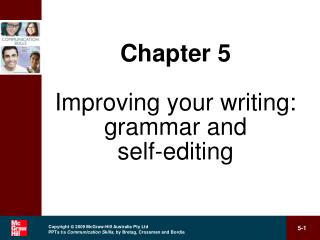 Chapter 5 Improving your writing: grammar and self-editing. Learning objectives. On completion of this chapter students will know how to: identify ways to improve writing independently develop a strategic approach to editing written work

Improving Your Writing Process - . the writing studio at keiser university 2007. the writing process simplified. many

Four-step editing process - . the first copy is the worst copy. if you are merely spell checking, you are not editing.

Writing, Re-writing and Editing for Structure (Part I) - . = developing a story that works. what are the elements of a

Revision and Editing - A quick guide to getting it right. revision and editing. editing. is on a sentence level,

Technical Writing - . ref: how to write a paper, mike ashby

Strategies for Editing - . university writing center jaclyn wells. revising vs. editing. we often use the words