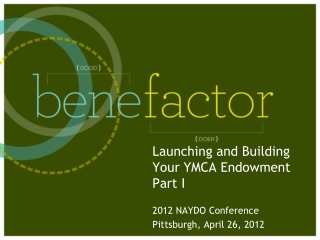 Launching and Building Your YMCA Endowment Part I

Launching and Building Your YMCA Endowment Part I 5 Unique Fundraising Ideas - Fundraising should never be boring as it is bad for volunteers as well as donors. it is why Profitable Solutions Fundraising - Offers a unique collection of every day use products. these high quality detergent

Fundraising Shops Help Charity - If you are shop online, so why not shop and donate at the same time? it’s a double Fundraising - . the office of student life. why fundraise?. fundraising is a great way for your student organization to

Fundraising 101 - . “fundraising is the gentle art of teaching others the joy of giving.” -hank rosso. what do you It s a Disaster Disaster Preparedness Fundraising Ideas - 2. who is mdri?. members disaster relief, inc. (mdri) is an irs