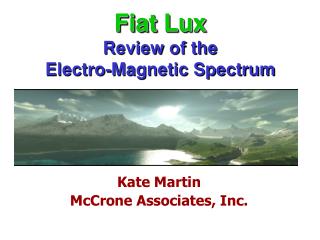 The electro-magnetic spectrum - . key facts. all the waves travel at the same speed – around 300 000 km/s. key facts.

Light and the Electro-magnetic Spectrum - . light and the electromagnetic spectrum. almost all of our information on the

Lux the Clutz - . by kayleen concepcion and sydney nauta. once upon a time…. there was a girl named lux. she was the