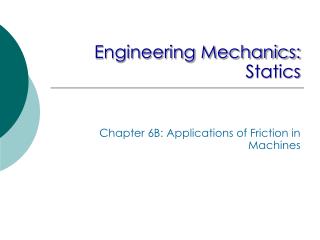 Engineering Mechanics: Statics . Chapter 6B: Applications of Friction in Machines. Wedges. Used to produce small position adjustments of a body or to apply large forces

Structures and Mechanics with fischertechnik The World of Statics – Level 1 - . what you’ll learn…. an introduction

Statics - . statics is concerned with the equilibrium of bodies that are at rest or moving with a constant velocity