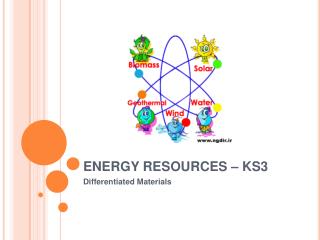 ENERGY RESOURCES – KS3. Differentiated Materials. Key Words. Energy – being able to do work. e.g. food gives us energy, so that we can move Fuel - Fuel is anything that is burned or altered to obtain energy. Fuel gauge. Solar power. Most of the Earth's energy comes from the sun

WaNuLCAS: a model of Water, Nutrient and Light Capture - In agroforestry systems used to evaluate alternatives to slash

ENERGY RESOURCES FOLDABLE - . fold a sheet of paper in half, hamburger style,. cut the first layer only,. label exactly

KS3 Environment - . w. richards worthing high school. the arrows show which way the energy is going in the chain. food

PVM and MPI What Else is Needed For Cluster Computing? - . al geist oak ridge national laboratory

Author - Science. project overview. learning areas. level. 13 years. objectives. to give pupils an understanding of the

Environment - . q1. what is an animal that hunts other animals for food called?. a1. predator. q2. what do you call an