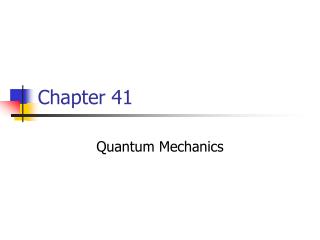 Ezekiel Chapter 41 - . theme: description of the millennial temple. outline of ezekiel. 1-3 the call of the prophet

Chapter 41 - . atomic structure. goals for chapter 41. to see how to write the schr ödinger equation for a

Chapter 41 - . animal nutrition. overview: the need to feed. food is taken in, taken apart, and taken up in the process

Chapter 41 Comfort - . categories of pain. source nociceptive neuropathic psychogenic area to which it is referred

Chapter 41 Assessment and Management of Patients With Diabetes Mellitus - . diabetes mellitus . a group of diseases

CHAPTER 41 - . animal nutrition. you must know:. the major compartments of the alimentary canal—oral cavity, pharynx,

Chapter 41: Animal Nutrition - . why do we eat? fuel (chemical energy) to get organic material for biosynthesis (carbon

Chapter 41 - Review by lakshmi. chapter 41. which food chain correctly describes the flow of energy in an ecosystem? a.

Chapter41 All About Atoms - . atoms are the basic building blocks of matter that make up everyday objects. a desk, the