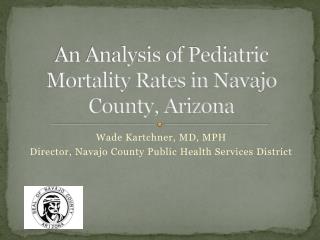 An Analysis of Pediatric Mortality Rates in Navajo County, Arizona

An Analysis of Pediatric Mortality Rates in Navajo County, Arizona

Trends in Mortality and Morbidity and why you should care - . nigel bradshaw. mortality is improving, isn’t it?. and

Navajo I ndians - . by: c b. a r e a. the navajo are the largest indian tribe in the states on 17 million acres in the

Navajo - . by john, emu, avery, bethany, and emily. navajo information. the navajo came from the north in the early

Navajo Sandstone - . “one of the largest wind-deposited formations in the geologic record.&quot;. picture:

Navajo Baskets - . and the constant change of culture. the traditional navajo baskets. w hite center of the wedding

Infant Mortality in Lane County - . using the perinatal periods of risk approach to look at local fetal and infant

Investigation of the Contribution of Birth Defects to Infant Mortality Rates in Polk County, Iowa: A New Approach to