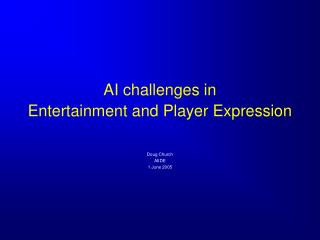 AI challenges in Entertainment and Player Expression. Doug Church AIIDE 1 June 2005. Who Am I. Programmer by Schooling Designer/Programmer by Training/Practice Interested in Technology enabling Design

ICT and Entertainment - . this lesson will cover:. digital and online television and 3d technology . how ict is used with

AI for Connect-4 (or other 2-player games) - . minds and machines. what move to make?. some strategies: random move

Entertainment In Warrnambool… - . by wren , rebecca , lolita, nicola and kate!. photo from ladybayresort.com.au.

Strong AI and Weak AI - . there are two entirely different schools of artificial intelligence: strong ai: this is the

You Are Player One User Interfaces in Interactive Entertainment - . richard marks manager, special projects. an interface

Expression in PowerPoint! - . teaching every student in the digital age! rachel and lisah , february 26, 2013. adding