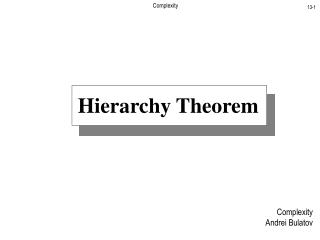 Complexity. 13-1. Hierarchy Theorem. Complexity Andrei Bulatov. Complexity. For a language L over an alphabet , we denote the complement of L , the language * - L. Definition The class of languages L such that can be solved by a