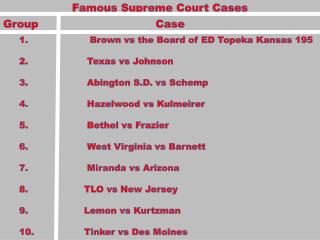 Amendments &amp; Famous Cases - . rap! write down all of the 1 st 10 amendments to the constitution you can think of

SUPREME COURT CASES - . the supreme court held that anyone accused of a felony, where imprisonment may be imposed, has a

SUPREME COURT CASE PROJECT - . what you will create. chose a seminal supreme court case (no one can choose the same case)

Landmark Supreme Court Cases - . marbury v madison ( 1803). significance : the power of judicial review was given to the

The United States Supreme Court Article 3 of the US Constitution - . how did the supreme court under chief justice john

CH. 18-3 THE SUPREME COURT - . american government. judicial review. “equal justice for all ” the lofty goal above