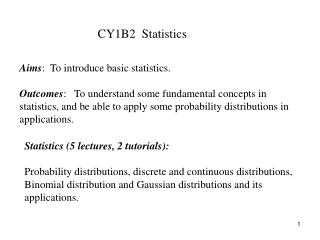 CY1B2 Statistics. Aims : To introduce basic statistics. Outcomes : To understand some fundamental concepts in statistics, and be able to apply some probability distributions in applications. Statistics (5 lectures, 2 tutorials):

Function of Statistics - . when researchers quantify their data at the nominal, ordinal, or interval/ratio level of

Sabermetrics - Advanced Statistics in the MLB - . on base percentage (obp). measures the most important thing a batter

Statistics Basics - . adeem rubani. why are you doing this to us?!. boring- stay with me! needed for akt and gp life

Applications of Statistics in Research - . bandit thinkhamrop, ph.d.(statistics) department of biostatistics and

Basic statistics: a survival guide - . tom sensky. how to use this powerpoint presentation. the presentation covers the

Inferential Statistics - . research is about trying to make valid inferences. inferential statistics : t he part of