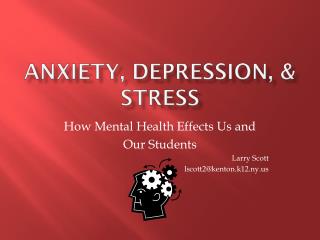 Anxiety, Stress, and Worry - . what is anxiety? what causes anxiety? danger of anxiety overcoming anxiety. what is

Working with People with Depression and Anxiety - . overview. what is depression? what is anxiety? depression / anxiety

Impact of antenatal maternal stress, anxiety and depression on the fetus and the child - . . the mother's emotional state

Bio-Ecological Stress - . stress arousal resulting from our relationship with our environment. symptoms. irritability

Adrenal Fatigue Is Behind Your Anxiety - Scientists have found a connection between adrenal fatigue and anxiety. when