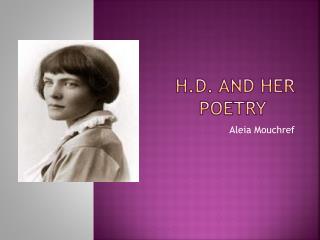 Imagism - . clarity of expression through the use of precise visual images. destroying the petty, bourgeois (and other

ENGL 102 Gender and Poetic Voice - . “eurydice” by h.d. “the applicant” by sylvia plath “snapshots of a

AMERICAN MODERNISM - . 1914-1946. after the great war. the devastation of world war i brought about an end to the sense

Bellwork : “Lowell or HD” - . in your extremely knowledgeable opinion, who is the better poet, based on the selection

marianne Moore - “i see no reason for calling my work poetry except that there is no category in which to put it.” -

Poetry - . poetry is not a rose, but the scent of the rose . . . not the sea, but the sound of the sea. eleanor farjeon

Imagism and Imagist Poets - . “an image is that which presents an intellectual and emotional complex in an instant in