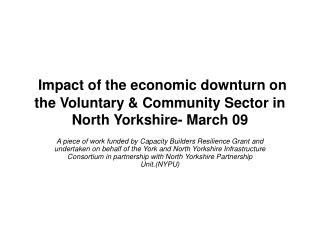 Impact of the economic downturn on the Voluntary & Community Sector in North Yorkshire- March 09. Economic Liberalization and the Tourism Sector in Tanzania - . overview of the tourism sector liberalization of the

How would you label the Worldview of our society in North America? - . individualism: 1. a theory that individual freedom

Financial crisis and economic downturn: Where did they come from and where are they going? - . presentation by charles