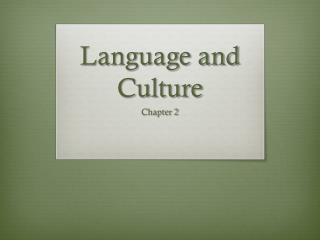 Language and Culture. Chapter 2. Part I. Language Reflects Culture. Language tends to reflect the larger culture Example: Inuit have many words for snow and seal, whereas English does not (pg.18) Inuit language is an agglutinating language that strings ideas into long words