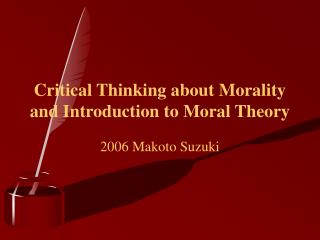 We will consider this question, taking into account what Regan and ... like appealing to Makoto on what clothes, cosmetics, hair styles etc. are fashionable) ... Introduction to Theory - . its not as boring and useless as you might think. what is theory?. not “ivory tower” bs

Introduction to Beam Theory - . area moments of inertia, deflection, and volumes of beams. what is a beam?. horizontal