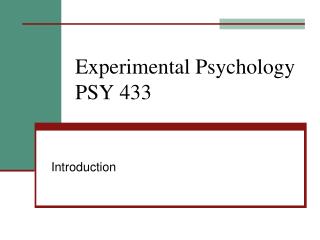 Hypothesis If monkeys attribute monkey behavior to humans, they will treat ... Place an unguarded grape in reach of a monkey and see if it will steal it when ...

Intro To Chemistry - . element quiz. you will be required to memorize the following elements for the quiz on monday

Intro Video - . unit map: follow along in your packet. what are you learning? as.06.02 basic: recognize, id, and eval

Intro to Ecology - . what is ecology??. the study of interactions that take place between organisms and their

An intro to Scratch - . notes and tasks for itec-i5 camp leaving lots of exploration for the future. what are our goals?.