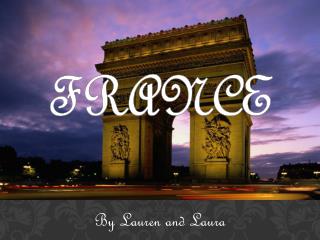 FRANCE. By Lauren and Laura. population. It was estimated in July 2013, that France had a population of 65,951,611 and it had a growth rate of 0.47% . France has a slightly declining population due to it’s slightly under replacement level fertility rate. Population Density maps . By Lauren - Math on the menu. by lauren. using fractions on the job. i am a chef, and i use fractions everyday on the

By Genevieve and Lauren - . history. sears - agent of railway station in mn sears - sold lumber and coal to locals

By: Lauren Noe - Titanic. by: lauren noe. why is titanic still important today?. because a lot of people died, and that

By Lauren Bartlett - Math on the menu. by lauren bartlett. using fractions on the job. i am a chef and i use fractions

By Lauren Barbo - The puritans. by lauren barbo. in the beginning…. the puritans were a group of people who separated

Functions and Patterns by Lauren McCluskey - . exploring the connection between input / output tables, patterns, and

Functions and Patterns by Lauren McCluskey - . exploring the connection between input / output tables, patterns, and

Weather By: Lauren Peterson - . after this lesson students can:. identify cold fronts and warm fronts give their own

By Laura Dolezal - The mineral quartz. by laura dolezal. insert pictures of different types of quartz.

By Laura Henderson - Venezuela &quot;the imperialist, genocidal, fascist attitude of the us president has no