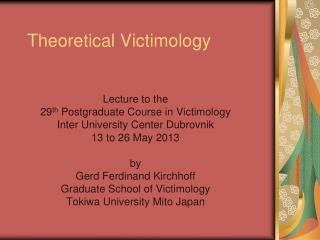 VICTIMOLOGY - . the study of crime victims. what are the sources of data?. police and court statistics british crime

Victimology - . and anthropology and race. victimology. until recently, victims were not studied passive recipients of

VICTIMOLOGY - . the study of crime victims. what are the patterns?. first of all what are your perceptions about who

Development of Victimology - Objectives. fear of crime and impact upon societyextent of crime and crime trends in us and

What is Victimology - . presentation to the 2009 asian postgraduate course by prof. dr. gerd ferdinand kirchhoff tokiwa

Forensic Victimology 2nd Edition - . chapter one: victimology - a brief history with an introduction to forensic

Chapter 16 Victimology: Exploring the Experience of Victimization - . chapter summary . chapter sixteen is an overview of